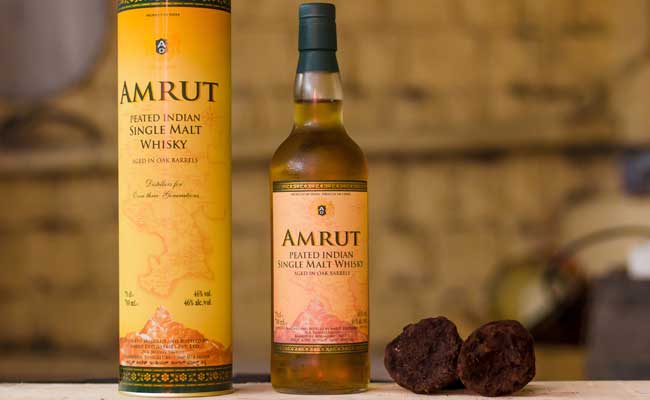 After launching their first single malt back in 2004, Amrut was propelled into the spotlight after famous whisky writer and reviewer, Jim Murray awarded them a score of 82 out of 100 in 2005, and in 2010 named their Amrut Fusion as the 3rd best single malt in the world. According to the American whisky magazine Whisky Advocate, Amrut has "Changed the way we think of Indian whisky."

Amrut Distilleries Private Limited began in 1948 under the name and style of Amrut Laboratories, with an initial investment of barely a few lakhs. The founder was the late Shri J.N. Radhakrishna, J.N.R as he is fondly called to this day.

Under the leadership of the founder, Amrut Distilleries made rapid strides to entrench itself as a significant and preferred supplier of Indian Made Liquor (IML) in the Defence Market. In its state of origin, Karnataka, too, Amrut Distilleries grew to be one of the dominant suppliers, especially in the old Mysore area.

After the untimely demise of J.N. Radhakrishna Rao Jagdale in 1976, the mantle devolved on his son, Shri Neelakanta Rao, the present Chairman and Managing Director. Building on the solid foundations laid by his late father, he has seen Amrut Distilleries blossom into a multi-national brand respected as much for the superlative quality of its products as his campaign for transparent practices by the IML industry.

Amrut single malt whisky is manufactured at Amrut Distilleries' main distillery located on a 4-acre site in Kambipura, a village on State Highway 17. The distillery was built in 1987. Amrut single malt whisky is made from barley, and for some variants, peated barley. Barley is procured from Haryana, Punjab and Rajasthan, while the peated barley is imported from Production Scotland. Peat is a fossil fuel traditionally used in Scotland to dry malted barley before distillation. It imparts a distinct smoky flavour to the whisky. Barley strains, cultivated in Haryana and Punjab, produce smaller grains with more flavours.

The manufacturing process involves the use of six 10,000-litre stainless steel fermenters, two unique conical 5,000-litre copper Pot stills with copper condensers and new and used ex-Bourbon barrels. The water used in the manufacturing process is transported to the distillery by truck from a well, 24 km away, in a pesticide-free agricultural area owned by the company.

Amrut Fusion was launched in 2009. It is produced using 25% Scottish peated barley and 75% unpeated Indian barley.

Amrut Intermediate Sherry was launched at Whisky Live Paris on 25 September 2010. The spirit used in the product is matured in either ex-Bourbon or new casks, and then in Sherry casks imported from Spain and Portugal.

Amrut Kadhambam is aged in various casks, which each impart unique characteristics to the product. Kadambham is a Tamil word meaning mixture.

Amrut Greedy Angels was a limited edition 50% abv, 8-year-old single malt whisky released in April 2013. Amrut Distilleries claims that it is the oldest Indian whisky ever produced. Its name comes from the term angels' share, the portion of whisky lost during maturation.

The eight-year maturation in Bangalore resulted in a high evaporative loss of 12% per annum, or a total loss of 274 litres of spirit over eight years, from the two Bourbon casks the distillery had used.
When filled in 2004, the casks held approximately 360 litres of spirit. Only 144 bottles or 86 litres of whisky were released worldwide. Greedy Angels were dedicated to celebrating the 60th birthday of Amrut Distilleries chairman and MD, Neelakanta Jagdale.

Amrut Double Cask was a limited edition of 51 cases released in March 2010.