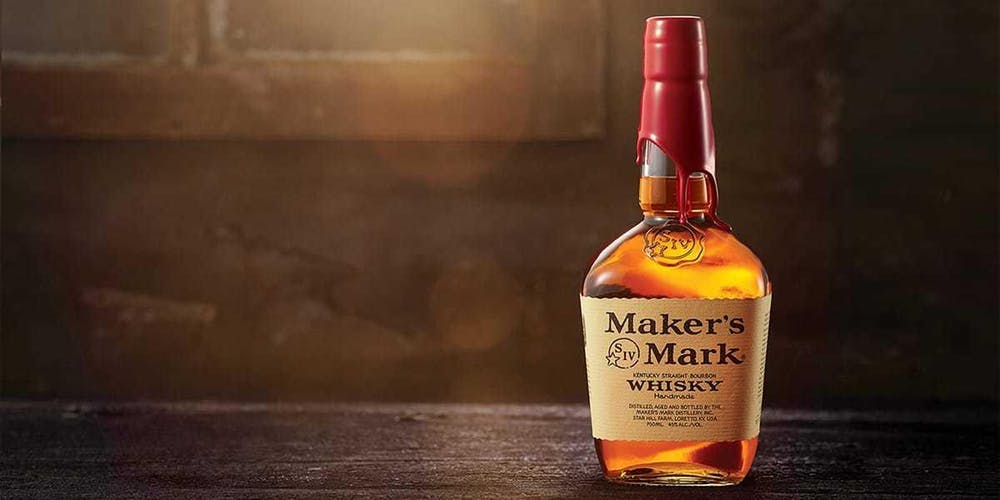 Maker's Mark is a small-batch bourbon whiskey produced in Loretto, Kentucky, by Beam Suntory. It is bottled at 90 U.S. proof (45% alcohol by volume) and sold in squarish bottles sealed with red wax.  Maker's Mark is unusual in that no rye is used as part of the mash. Instead of rye Maker's Mark uses red winter wheat (16%), along with corn (70%) and malted barley (14%) in the Mash Bill. During the planning phase of Maker's Mark, Samuels allegedly developed seven candidate mash bills for the new bourbon. As he did not have time to distill and age each one for tasting, he instead made a loaf of bread from each recipe and the one with no rye was judged the best tasting. Samuels also received considerable assistance and recipes from Stitzel-Weller owner Pappy Van Winkle, whose distillery produced the wheated Old Fitzgerald and W. L. Weller bourbons.

Maker's Mark is aged for around six years, being bottled and marketed when the company's tasters agree that it is ready. Maker's Mark is one of the few distillers to rotate the barrels from the upper to the lower levels of the aging warehouses during the aging process to even out the differences in temperature during the process. The upper floors are exposed to the greatest temperature variations during the year, so rotating the barrels ensures that the bourbon in all the barrels has the same quality and taste.
Maker's Mark is marketed as a small batch Bourbon. Most producers of so-called small batch Bourbons do not clarify exactly what they mean by the term. The producer of Maker's Mark says that the traditional definition is "A bourbon that is produced/distilled in small quantities of approximately 1,000 gallons or less (20 barrels) from a mash bill of around 200 bushels of grain".
Maker's Mark is sold in squarish bottles that are sealed with red wax. T. William Samuels' wife, Marjorie "Margie" Samuels, gave the whiskey its name, drew its label, and thought up the wax dipping that gives the bottle its distinctive look. It was introduced to the market in 1959.
Three varieties are marketed: the original, bottled at 90 U.S. proof (45% alcohol by volume); a mint julep flavor with green wax on the neck released seasonally in limited amounts; and Maker's 46 (47% alcohol by volume), a variety flavored by introducing seared French oak staves into the traditional charred white oak barrel toward the end of its aging.
Maker's Mark is, along with George Dickel and Old Forester, one of a handful of American-made whiskies that uses the Scottish spelling "whisky" rather than the predominant American "whiskey".