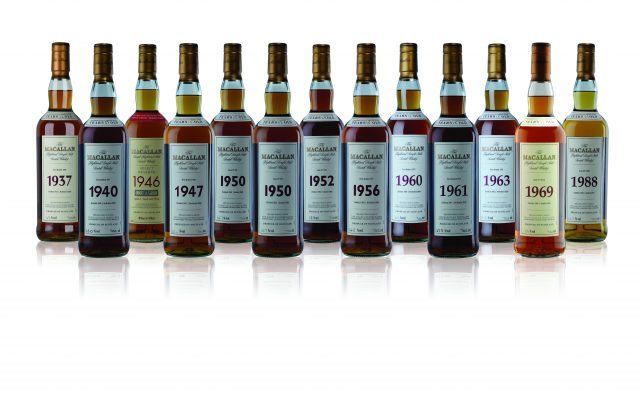 The Macallan distillery is a single malt Scotch whisky distillery in Craigellachie, Moray. The Macallan Distillers Ltd is a wholly-owned subsidiary of the Edrington Group, which purchased the brand from Highland Distillers in 1999. In 2009, The Herald reported that The Macallan was "the world’s third largest-selling single malt (behind Glenfiddich and Glenlivet) with over 500,000 cases a year, and second-largest by value".

The Scotsman published a quote from Ken Grier on 16 August 2009, stating: "We have now overcome Glenfiddich to move into the second biggest selling single malt by volume behind Glenlivet". In 2011, Edrington Group reported that prior-year sales of The Macallan were up 8% to over 700,000 cases and the BBC also reported that an office was being opened in New York to continue growth in the American market. Originally, The Macallan was matured only in oak sherry casks brought to the distillery from Jerez, Spain. Beginning in 2004, The Macallan introduced a new main product, the Fine Oak series, with the whisky mellowed in bourbon oak casks as well as sherry ones.

The distillery produces several expressions in its core Sherry Oak series, the most generally available being the 12-year-old, although the 18- year-old is widely distributed, alongside a 10-year-old cask strength expression at 58% ABV; expensive 25- and 30-year-old versions can also be found. More recently, starting in 2004, The Macallan for the first time started to offer single malt expressions vatted with whisky matured in used casks other than ex-sherry casks as part of the Fine Oak range. Macallan also markets special scotches in duty-free shops at airports such as the 1824 Collection.

Many rare, special releases and other small production run bottlings also exist, and over the last 15 years have been breaking records at auctions around the world.

2010, saw a bottle of The Macallan 64-year-old single malt whisky in a one-of-a-kind "Lalique: Cire Perdue" crystal decanter was sold for $460,000 at an auction at Sotheby's in New York City. All proceeds from the sale were donated to charity: water, an organization that helps provide access to clean, safe drinking water to people in developing nations.

The Macallan Fine and Rare 60-Year-Old 1926 became the most expensive bottle of wine or spirit ever auctioned when it was sold for $1.9 million on Thursday, October 24, exploding records.........again.